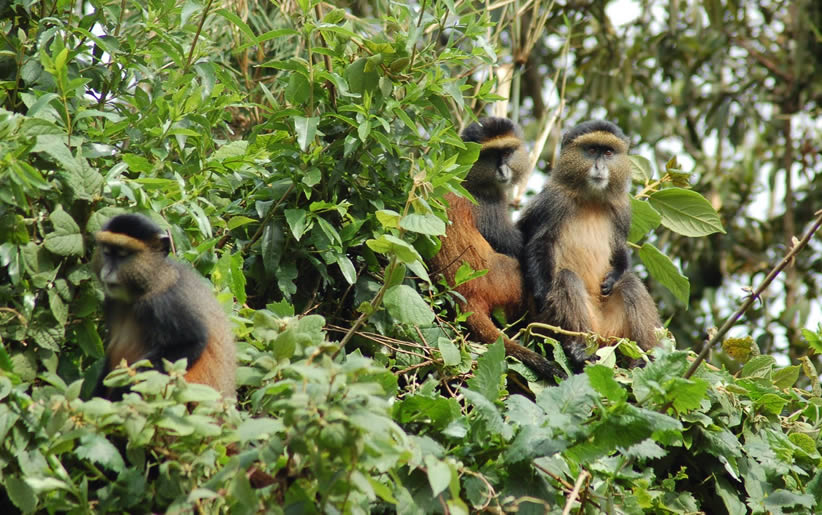 Gishwati Mukura National Park was gazetted in 2015, Gishwati-Mukura is Rwanda’s newest national park. It consists of the Gishwati and Mukura forests, which are about 25km apart in western Rwanda. The main attraction is a troop of habituated chimpanzees. Other primates include golden monkey, blue monkey and l’Hoest’s monkey. As of late 2018, there was no accommodation or other tourist development in the park, but it’s likely the development of a new luxury/upmarket lodge on the fringes of the Gishwati sector of the park will occur soon.

The forest is home to chimpanzees, l’Hoest’s monkeys and the charismatic golden monkeys, which are endemic to the Albertine Rift. Other small mammals include tree hyrax and black-fronted duiker. Although there hasn’t been any recent research, the new park looks like a promising bird-watching destination as well. Specials include 14 Albertine Rift endemics, including Rwenzori turaco and red-throated alethe. Note that walking trails are limited, and no official activities were being offered as of early 2019. It is, however, possible to enter parts of the forest and see how the conservation efforts are progressing.

Gishwati Forest is located on a newly surfaced road 85km from Kigali, 40km from Rubavu and 55km from Musanze. The park can easily be visited on a drive-around tour of the country. The undeveloped Mukura sector of the park is some 35km east of Karongi, reached along dirt roads.

This is the topmost tourism activity that you can enjoy while visiting the park. Gishwati Mukura National park offers one of the best natural habitats for primates in Rwanda. Since primate watching is one of the tourist activity that has attracted several tourists in Rwanda, then this makes the park an obvious place for primate lovers.  The vast primates you can enjoy here in the park include golden monkeys, blue monkeys, baboons, and chimpanzees which has the highest number of all primates around. As you are on primate exploration, you can also encounter other wild animals such as duikers, wild cats, and many more others. Visitors are first briefed at the park headquarters before they embark on a primate expedition in the forest.

Gishwati Mukura National park is a magnificent destination when it comes to bird lovers. The park is a fabulous lawn for bird devotees as it harbors over 83 bird species of which 15 species can only be sighted in Albertine rift and this has made Gishwati Mukura to be ranked as one of the best birding destinations in Rwanda.

The most common bird species you’re likely to encounter while on birding safari in the park include grey crowned crane, Rwenzori Batis, wood hoopoes, martial eagle, strange weavers, Rwenzori turaco among others. Bird watching in Gishwati Mukura National Park can be conducted on foot since the park is not all that large. You will need the services of an experienced guide from the park headquarters who will help you to identify your bird specification and also spot for you the best birding park sections.

Rwanda s tourism is based on ecotourism principles that involve empowerment, integration, and involvement of the local community in tourism income-generating projects. To full fill this principle, visitors visiting Gishwati Mukura are also encouraged to undertake community tours especially to the communities adjacent to the national park.  With community tours as the visitors, you can learn different cultural values and activities such as making local crafts and preparation of Rwanda local.  Communities in Rwanda are involved in plantation agriculture and therefore you can as well visit their gardens or a day or spend a night as you enrich cultural experience .you can as well attend local cultural performances including dance, drama, songs, and storytelling which say more about Rwanda and its culture.

Hiking and nature walks is an amazing activity that offers an amazing experience to travelers visiting Gishwati Mukura National park. This park encompasses well-made trails that pass via the forest where this activity of hiking and nature walks does occur.As you’re doing nature walk activity, you will get a chance to explore different creatures of the forest such as the chameleon, insects, butterflies, and bird species without forgetting amazing primates. You will be shocked by the silence of the forest only to hear the sound pops of your feet. Keep your eyes open ready to spot over 60 species of trees including ferns, orchids, and bamboos.

Still while on this hiking and nature walks you will encounter different bird species such as crowned crane, Rwenzori Batis, wood hoopoes, martial eagle, strange weavers, Rwenzori turaco, and primates such as chimpanzees, baboons, L’hoest monkeys, blue monkeys among others. Visit Gishwati Mukura National park for a memorable experience in Rwanda

Biking or cycling via the Congo Nile Basin

Biking or cycling activity in Gishwati Mukura National park is conducted on the Congo Nile Trail. The Congo Nile basis provides an adventurous and thrilling experience to travelers exploring this trail. This stunning was designed in such a way that it passes through Lake Kivu and then connects to Nyungwe forested National park. The Congo Nile basin is adjacent to Gishwati-Mukura National Park providing travelers an opportunity to reconnoiter rural Rwanda and immerse in Rwandan culture.