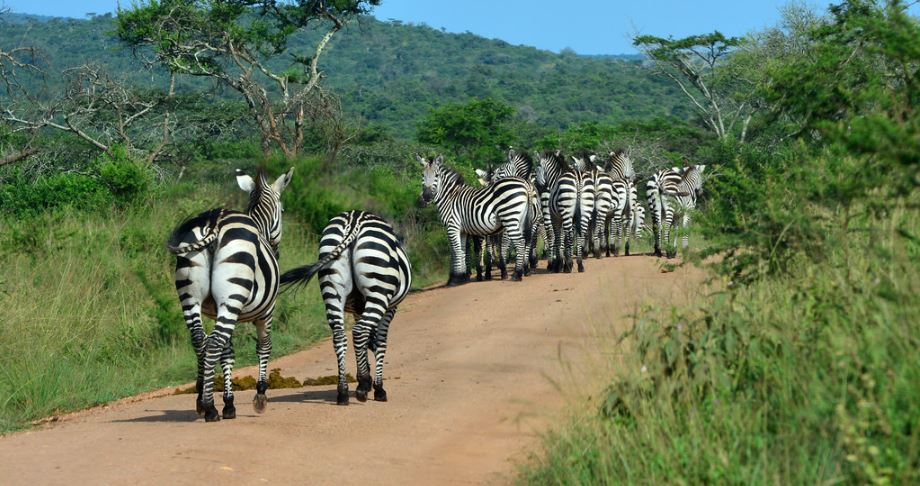 Lake Mburo National Park is located in Kiruhura District in the Western Region of Uganda, about 30 km (19 mi) east of Mbarara and about 240 km (150 mi) by road west of Kampala.

Lake Mburo was originally gazetted in 1933 as a controlled hunting area and upgraded to a game reserve in 1963.The region was settled by Banyankole Bahima pastoralists who traditionally herd Ankole cattle, and still do. The residents continued to graze their cattle in the reserve, a situation decried by western conservationists, who termed them “invaders” in 1981, but were expelled from their lands after it was upgraded to national park status in 1983, as hoped for by some in the West.

The Obote government’s upgrade decision was to weaken the Banyankole, who support anti-Obote rebels. It came at the time of the Operation Bonanza massacre of 300,000 people during the Ugandan Bush War. As the evicted pastoralists were not compensated for lost grazing land or assisted with resettling, many remained hostile to the upgrade. The rangeland outside the park was subsequently subdivided into small ranges and subsistence farming plots.

In 1985, the second Obote regime fell and the previous residents of Lake Mburo re-occupied the park’s land, expelling park staff, destroying infrastructure, and killing wildlife. Less than half of the park’s original land area was eventually re-gazetted by the National Resistance Movement government in 1986.

Within the park there are still culturally significant locations, such as Rubanga, where sacrifices were once made to the gods, Ruroko is where the semi-mythical Bachwezi lived, and Kigarama was where the pages (servants) of the king used to stay

The park has a good variety of wildlife. There are also several antelope species including topi, duiker, oribi, bohor reedbuck and also klipspringer. Elephant are absent, but herds of buffalo are quite common, and Rothschild’s giraffe. A healthy population of leopard is present, although mostly seen at night. Hippo and crocodile are also in the lake.

More than 310 bird species are in Lake Mburo National Park. This park is the best place in Uganda for acacia-dwelling birds. Forest species are also present in Rubanga Forest. A bonus for birders is the swamps, in which six papyrus specials are resident, including the spectacular papyrus gonolek and the blue-headed coucal. Southern species at the northern limit of their range include the black-collared barbet and bare-faced go-away bird. Migratory birds are present from November to April.

Lake Mburo National Park is open year-round, but the Dry seasons from June to August and December to February are the best times for general wildlife viewing as animals gather around the lake and other water sources. Wildlife viewing is still OK in the Wet seasons from March to May and from September to November and at this time the park is lush and scenic.

Lake Mburo National Park experiences a mild climate. Daily temperatures are around 27°C/81°F, with nightly temperatures of 14°C/57°F on average. Rain occurs throughout the year – although June and July get the least amount of rain. December through February also tends to be a period of lesser rainfall. There are two Wet seasons, from March to May and from September to November.

Tourists usually visit Lake Mburo National Park on a tour, possibly as an overnight break when driving between Kampala and Bwindi Impenetrable NP. Lake Mburo is in western Uganda, 228km/142mi from Kampala and 250km to 300km/155mi to 180mi from Bwindi. This depends on which gorilla trekking base you are going to. The drive from Kampala takes about 5 hours and the drive on to Bwindi about 6 to 7 hours.

Entebbe International Airport (EBB) is about 46km/29mi from the country’s capital, Kampala. This will be your entry point into Uganda. Your local tour operator will usually arrange for your pick-up from the airport or hotel and all further transportation as part of your safari package