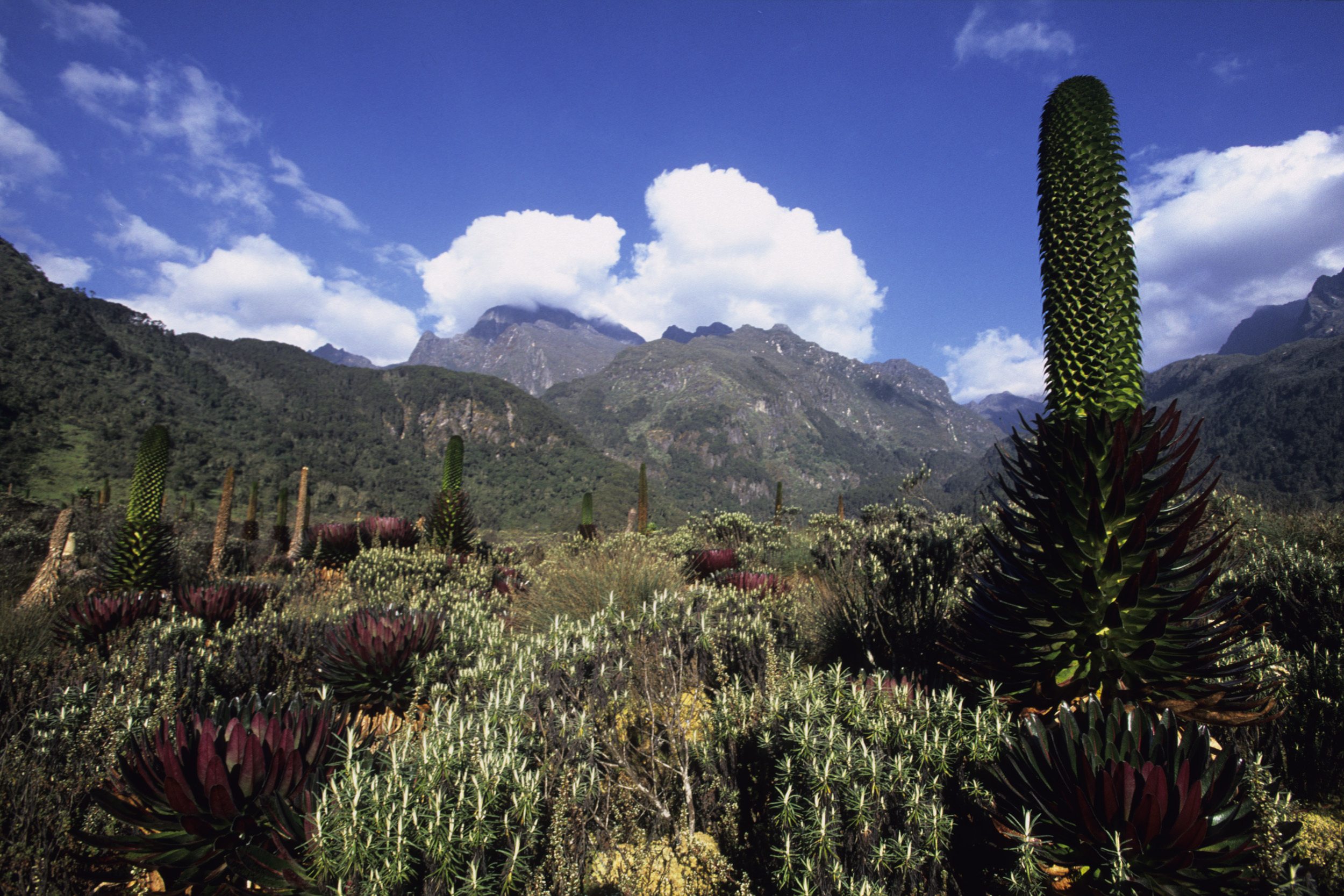 Rwenzori Mountains National Park is a Ugandan national park and UNESCO World Heritage Site located in the Rwenzori Mountains. Almost 1,000 km2 (386 sq mi) in size, the park has Africa’s third highest mountain peak and many waterfalls, lakes, and glaciers. The park is known for its beautiful plant life.

Rwenzori Mountains National Park was established in 1991. It was designated a UNESCO World Heritage Site in 1994 because of its outstanding natural beauty. Rebel militias occupied the Rwenzori Mountains from 1997 to June 2001. The park was inscribed on UNESCO’s List of World Heritage in Danger between 1999 and 2004 because of insecurity and a lack of resources in the park

Rwenzori Mountains National Park is located in south-western Uganda on the east side of the western (Albertine) African rift valley. It lies along Uganda’s border with the Democratic Republic of the Congo (DRC) and borders the DRC’s Virunga National Park, also a UNESCO World Heritage Site, for 50 km (31 mi). Situates in the Bundibugyo, Kabarole, and Kasese districts, 25 km (16 mi) from the small city of Kasese. Also, it is 996 square kilometres (385 sq mi) in size,[6] 70 percent of which exceeds an altitude of 2,500 metres (8,200 ft)] The park is 120 kilometres (75 mi) long and 48 kilometres (30 mi) wide.

The park includes most of the centre and eastern half of the Rwenzori Mountains, a mountain range rising above dry plains located just north of the equator. Those mountains are higher than the Alps and are ice-capped. Mount Stanley is located in the park. Margherita Peak, one of Mount Stanley’s twin summits, is Africa’s third highest peak with a height of 5,109 metres (16,762 ft). Africa’s fourth and fifth highest peaks (Mount Speke and Mount Baker) are also located in the park. The park has glaciers, snowfields, waterfalls, and lakes and is one of Africa’s most beautiful mountain areas

The mountain ranges boast of 20 lakes with Lake Mahoma being the most accessible. Lake Bajuku lies in the valley of Mts Stanley, Baker and Speke. Dams created a string on 8 beautiful lakes on the Nyamwamba trail including Lake Kitandara.

Hikers should consider symptoms and treatment of hypothermia and other forms of altitude sickness. Above 2500 m, altitude sickness can affect anyone regardless of age, fitness, or previous mountain hiking experience. The most effective treatment is descent to lower altitude. Carry the following basic items for your hike, sleeping bag, warm clothing

A trip into the Rwenzoris is an exhilarating and rewarding experience but you need to prepare adequately. The key to an enjoyable visit is to prepare! The conditions on the mountain are a challenge to even an experienced hiker. The central hike circuit takes six nights or seven days and reaches an altitude of 4,267m above sea level. While on the hike you will spend nights at various huts which are well maintained and you will have porters to help with the luggage you need to go along with. There are different starting points for different trails; Nyakalengija central circuit and Kilembe trail are located near Kasese town whereas Kazingo (nature walk trailhead) is located near Fort portal town. For those not in for the entire trail, you can have 3 days in the lower foothills of the mountains that take you through beautiful scenery and birding spots.

Carry a sleeping bag, warm clothing, raincoat, and waterproof over trousers, plastic bags for wet clothing and plenty of snacks.

Rwenzori Mountain is one of the best birding spots in Uganda being a habitat for some of the Albertine rift endemics. It has varied vegetation which enables different bird species to call it home; the best bird watching is in the montane forest. Do not miss out on the Rwenzori Turaco, Long-eared Owl, Bearded vultures, and swifts

The communities adjacent to the park offers guided walks along the slopes of mountain Rwenzori. One can follow River Mubuku for views of Baker and Portal peaks or sometimes views of the highest peak – Margherita. Look out for squirrels, Vervet monkeys, chameleons and several spectacular birds.

Engage with the Bakonzo living on the foothills of the Rwenzoris. Take a trail where you watch them as they demonstrate their daily activities like gardening and animal husbandry, preparing daily meals – from farm to meal. Take a visit to the blacksmith, traditional healer, basket weavers and dance and storytelling performances. Alternatively, you can take a trail to cultural sites of the Bakonzo through the holy valley; this trail takes in total about 7 hours.

You can reach the park from Kampala via Fort portal or via Mbarara to Rwenzori Mts National park. You can also take scheduled or chartered flights from Entebbe to Kasese Airfield.