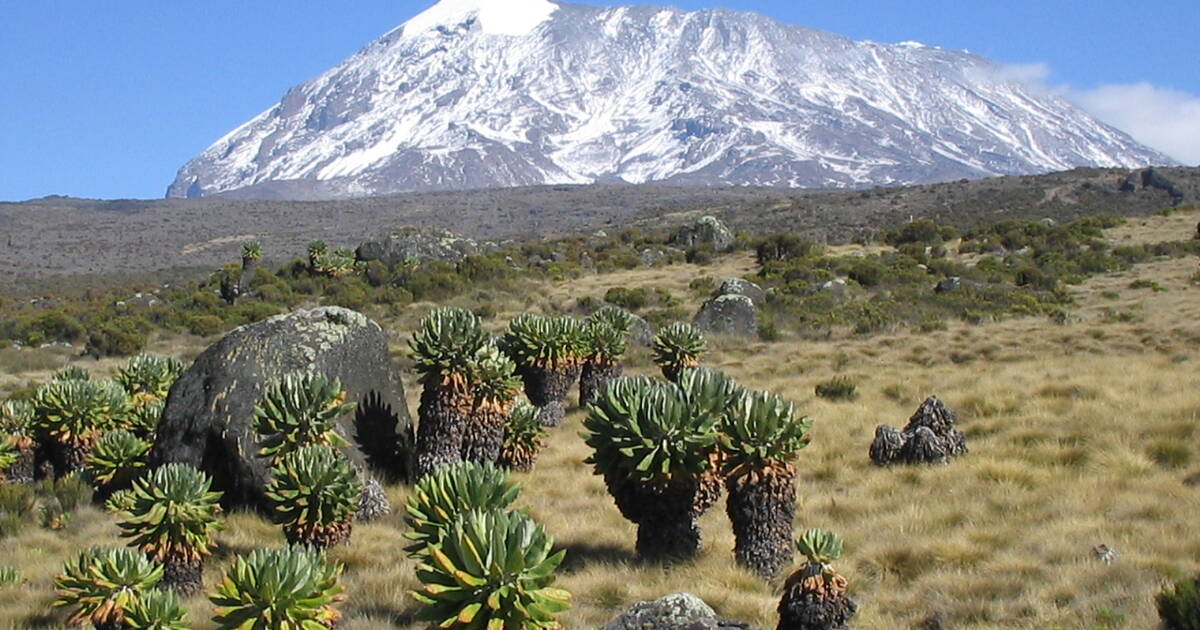 The highest mountain in Africa, snow caped and world’s highest free standing volcano. It comprises of two dormant volcanoes (Kibo 5,895m a.m.s.l and Mawenzi 5,149m a.m.s.l) and one extinct volcano (Shira 3,962m a.m.s.l) respectively. The origin of the word is not well known but it said to be a combination of the Swahili word Kilima meaning “Mountain” and the KiChagga word Njaro, loosely translated as “Whiteness” giving the name “White Mountain”.

Its size is 1,712Km2 and was declared as a National Park in 1973, officially opened for tourism in 1977, declared a World Heritage Site by UNESCO in 1987 and Natural Wonder of Africa in 2013. Climbing to the top which is far up into the sky it’s a life time experience that no one can forget.

Kilimanjaro National Park is a Tanzanian national park, located 300 kilometres (190 mi) south of the equator  and in Kilimanjaro Region, Tanzania. The park is located near the region of Moshi. The park includes the whole of Mount Kilimanjaro above the tree line and the surrounding montane forest belt above 1,820 metres (5,970 ft.) It covers an area of 1,688 square kilometres (652 sq mi), 2°50’–3°10’S latitude, 37°10’–37°40’E longitude. The park is administered by the Tanzania National Parks Authority (TANAPA)

There are two rainy seasons in a year. The wet season is from March to May during which it rains around the mountain base and snow accumulates on its peak.

The dry season is from late June through September during which the nights are cool and the days completely clear.

The park is located at an altitude between 1700 m to 5895 meter with annual average rainfall ranging from 828 mm at alpine desert to 2500 mm at Montane forest.

The park can be accessed by road or flight via Kilimanjaro International Airport – about 45km to the west. The Park Headquarters and one of the ascending gates are at Marangu, about 41Km from Moshi town and 86km from Kilimanjaro International Airport. The other seven gates of Rongai, Machame, Londorosi, Lemosho, Kilema, Mweka and Umbwe are around the mountain base and can be reached by road.

Kibo, the highest peak (5,895m) on Mount Kilimanjaro, is has snow. This is throughout the year despite being close to the equator. Conquering this peak is an adventure of a lifetime

Is the second highest peak which forms Mount Kilimanjaro 5,149m. It is rugy and maintains the features of glaciation

With an altitude of 3,962m, is the oldest peak that collapsed and forms a Shira plateau. It has outstanding scenic beauty on the mountain with several kinds of migratory large mammals. These include buffaloes, elephants and also elands.

Five eco-climatic zones take you to the equivalent of a trip from the equator to the arctic in a brief tour. As one climb Kilimanjaro, vegetation and weather changes in response to the changing elevation from montane forest, heath and moorland, alpine desert and the summit zone (arctic). The mountain peak also has snow all year-round

It is along Marangu route 2.8Kms provides a spectacular experience while enjoying walking inside the thick montane forest.

Activities for non-summit bound climbers include: