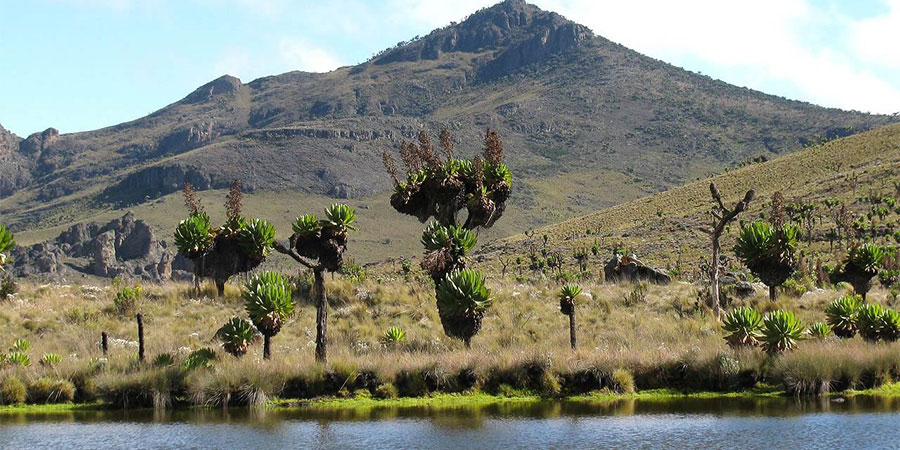 Mount Elgon National Park is uniquely split down the middle by the Kenyan-Ugandan border. Mount Elgon is an important water catchment for the Nzoia River, which flows to Lake Victoria, and for the Turkwel River (known as the Suam River in Uganda), which flows into Lake Turkana.

The climate is moist to moderate dry. Annual rainfall is over 1,270 millimetres (50 in). The dry seasons run from June to August and from December to March, although it can rain at any time

Elephants and buffalo can be found on the lower slopes. The park is also home to a variety of small antelope and duiker, as well forest monkeys, including the black-and-white colobus and blue monkey. Red-tailed monkey are thought to be locally extinct. Both leopard and hyena exist there.

Mount Elgon is home to at least 144 bird species. Of particular interest are Jackson’s spurfowl, the eastern bronze-naped pigeon, Hartlaub’s turaco, the Tacazze sunbird and the endangered lammergeier, due to their restricted range.

Maathai’s longleg, an endangered dragonfly was discovered here in 2005 and named after Nobel Prize winner Wangari Maathai. Half of Uganda’s butterfly species are in Mt. Elgon

Together with the fauna and flora, the park has a variety of scenery; this includes cliffs, caves, waterfalls, gorges, mesas, calderas, hot springs, and the mountain peaks. The most popular areas are the four explorable, vast caves where frequent night visitors such as elephants and buffaloes come to lick the natural salt found on the cave walls. Kitum cave, with overhanging crystalline walls, enters 200 m into the side of Mt. Elgon.

At the Endebess Bluff there a panoramic view of the areas’ escarpments, gorges, mesas, and rivers. The highest peak of Mt. Elgon on the Kenya side, Koitoboss, measures 4,155 m (13,632 ft), and you can reach easily by hiking in about two hours from the road’s end.

By air: You can as well use charter planes services to access Mount Elgon National park available at Entebbe international airport or Kajjansi airfield. These can airlift you up to Soroti airfield in the Soroti district. This can work for visitors who don’t like traveling long distances. From the airfield, you would travel by road for about 1 hour before reaching Mbale or Kapchorwa