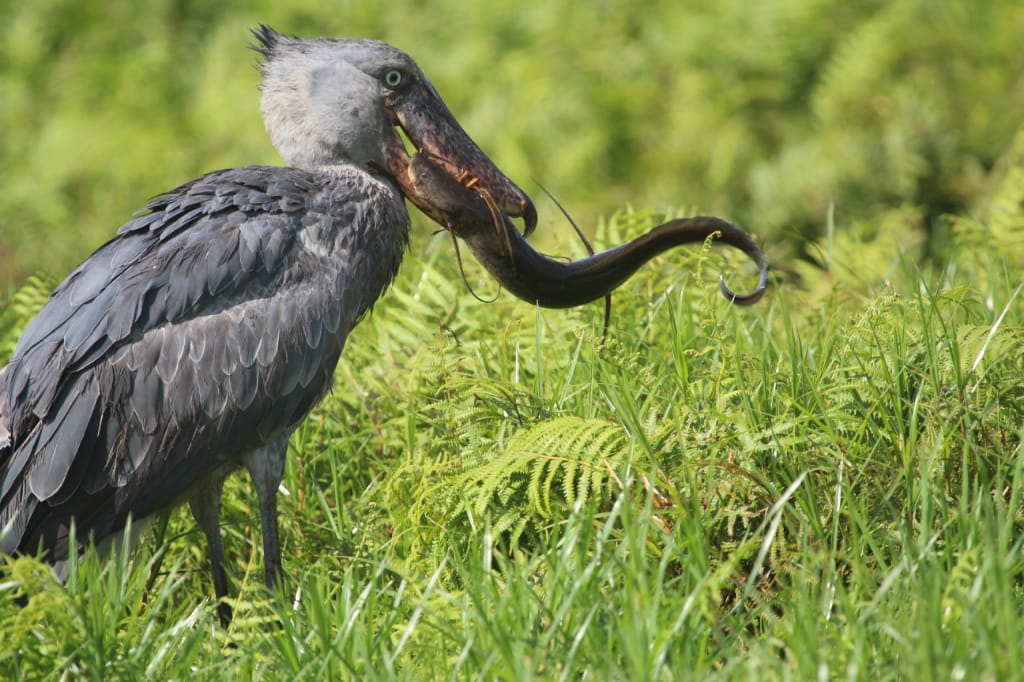 Semuliki National Park is a national park in Bwamba County, a remote part of the Bundibugyo District in the Western Region of Uganda that was established in October 1993. It encompasses 219 km2 (85 sq mi) of East Africa’s only lowland tropical rainforest. It is one of the richest areas of floral and faunal biodiversity in Africa, with bird and butterfly species being especially diverse. The park is managed by the Uganda Wildlife Authority.

Semuliki National Park lies on Uganda’s border with the Democratic Republic of the Congo. The Rwenzori Mountains are to the southeast of the park, while Lake Albert is to the park’s north. The park lies within the Albertine Rift, the western arm of the East African Rift. It is located on a flat to gently undulating landform that ranges from 670 to 760 m (2,200 to 2,490 ft) above sea level.

The park experiences an average rainfall of 1,250 mm (49 in), with peaks in rainfall from March to May and from September to December. Many areas of the park experience flooding during the wet season. The temperature at the park varies from 18 to 30 °C (64 to 86 °F), with relatively small daily variations.

The park borders the Semliki and Lamia Rivers, which are watering places for many animals. The park has two hot springs in a hot mineral-encrusted swamp. One of the springs – Mumbuga spring – resembles a geyser by forming a 0.5 m high fountain. These hot springs attract a large number of shorebirds and provide salt licks for many animals.

From 1932 to 1993, the area covered by Semuliki National Park was managed as a forest reserve, initially by the colonial government and then by the Ugandan government’s Forest Department. It was made a national park by the government in October 1993 to protect the forests as an integral part of the protected areas of the Western Rift Valley.

Semliki National park might not be the best destination for wildlife viewing, but it is a birdwatcher’s paradise. It has more than 460 species recorded in a variety of habitats. Boat trips on Lake Albert are ideal for a chance to see the elusive shoebill and a breeding colony of the stunning Red-throated bee-eater. The adjacent Semuliki National Park offers a great opportunity to add several species associated with the Congolese rainforest. Migratory birds are present from November to April.

The Dry season is the best time for a trip to Toro-Semliki Wildlife Reserve. The two Dry seasons are from December to February and from June to July. During the Wet season months (March to May and August to November) the roads become almost impassable.

You can reach the park from Kampala – Fortportal and then Semuliki national park. You can also take a scheduled or chartered flights from Entebbe to Semuliki wildlife reserve.

Nature walks happen deep in the forest together with a ranger guide. There are majorly three trails to follow inside the park;

Red monkey trail – this 11 km long trail follows the park boundary to the east and ends up at the Semliki River. You have chances of sighting the rare DeBrazza monkey.

Sempaya nature trail –This trail leads you to the Sempaya hot springs. The walk is through a patch of forest where you most likely to encounter black-and-white colobus monkeys, red-tailed monkeys, and grey-cheeked mangabey. Along the trail to the male hot springs, you pass a tree house where you view the abundant birdlife and beautiful scenery.

The Kirumia trail is 13 km and is perfect for birders, it ends up at the Semliki River and traverses the forest.

The Semuliki hot springs are a major attraction to various visitors to the park. The Bamba people use them for rituals as they communicate to their gods for blessings and protection. The walk to the male (named Bintente) and female (Nyasimbe) hot springs takes you through the forest where you watch red-tailed monkeys, grey-cheeked mangabey, and black-and-white colobus monkeys jumping from tree branches in search of food. The ‘female’ hot springs have a boiling fountain at over 1000C. Often you have an opportunity to cook plantains and eggs in the boiling waters and consume them as you continue your trekking journey.

The park’s main attraction is bird watching because of its location in the Albertine rift valley, low land forest, and its central African species. In fact, it hosts Central African bird species that you cannot find anywhere else in East Africa. Semuliki national park is home to 441 bird species, 46 of Guinea-Congo biome species found nowhere else in East Africa. The species to look out for include; Shoebill, dwarf honeyguide, Yellow-throated Cuckoo, yellow-throated Nicator. Also there is Great blue, Ross’s turaco, purple-breasted sunbird, orange weaver, white-crested hornbill, Red-billed Dwarf Hornbill, African Piculet, Swamp Palm Bulbul etc. The Shoebill is often sighted at Lake Albert while in the canoe birding. More areas for birdwatching in the park include – Sempaya, Ntandi, Kirumia trail, Semuliki River etc.

The primate walk is in Toro – Semliki wildlife reserve. You are briefed at the research camp and you walk towards the Kijura observation point. Then you continue your journey tracking the chimps. The trail can take between 4 – 6 hours as you follow the tracks of the chimps. The trail is exciting with several birds sighted along the way and occasionally Elephants, buffalos, and also lions.